After a few weeks of thinly veiled nationalism, another Olympics is in the books, and what an Olympics it was! From beginning to end, Rio 2016 didn’t disappoint.  The world reeled from fear of Zika. Olympic boxing cemented itself as a beacon of international corruption for a new generation. Phelps won, again- and again. Ryan Lochte did – well, I’m sure you know.

However, in all of the Olympic noise, it is easy to miss the trial, tribulation, and success of the world’s second largest economy- China. Fear not, dear reader for I am here to give you the top 6 Chinese stories from Rio 2016.  Grab a coffee – perhaps tea is more appropriate – and relax; the emotional spectrum from the Chinese Olympic camp is wide.

China is obsessed with gold medals, so that is why Miss Zhang Mengxue’s gold medal, China’s first of Rio, starts our list at number six. It is hard for those outside of Chinese to appreciate China’s lust for gold medals, only gold medals. Chinese celebrities of all types were out in force this year to tell their country to appreciate silver and bronze medalists. Here is internet superstar Papi Jiang on the topic:

She goes as far as to say that non medalist *insert gasp* deserve praise and national appreciation. However, a collective 1.37 billion sighs of relief reverberated through China when the first gold medal was captured. There were two additional bonuses. First, miss Zhang was not expected to medal, which created a perfect narrative for the success hungry country. Second and most importantly came this picture quickly turned meme: 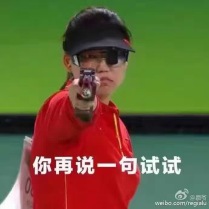 “你再说一句试试” roughly translates to “I dare you to speak.” For giving China the first gold and creating an iconic photo miss Zhang comes in at number 6 on our list.

Mack Horton is an Australian swimmer. He is also a swimmer that doesn’t appreciate competing against those who test positive for banned substances. Horton was asked how he felt about doping violators Sun Yang and South Korean Park Tae-Hwan competing at the Games, and responded: “I don’t have time or respect for drug cheats.”

This prompted an entirely reasonable, well articulated series of points from the Global Times (it is worth a read).  To be against Sun was to be distinctly anti-China. What was surprising to some was the scope and ferocity to which this notion caught on in China. Mack Horton is a racist who hates Chinese people; in fact, Australians in general are second class. This is NOT an uncommon opinion.

Mack Horton is now among the most hated men in China. In fact, I cannot think of a more disliked person.

Frankly, this was a disappointing Olympics for China. In the 2008 Beijing Olympics, China dominated the gold medal count collecting 51 golds. China went from topping the medal count in 2008 to placing second in medals in London 2012. Not only did China lose the overall medal count in London, they collected 8 less of the extremely coveted medals than the United States.

How was China’s medal count in Rio? China earned 26 gold medals, almost half of their 2008 performance. This puts them third in the medal column behind Great Britain with its whopping population of 61,000,000.

With friction in the South China sea, a slowing economy, political contradictions, and a war of words with Olympians from other countries, China needed a win. The situation was prime for China to show up in Rio and shut the world up.  The numbers simply did not meet national expectation.

This is a good place to talk about my biggest personal disappointment:

Zhang is my favorite Chinese Olympian. He might be my favorite Olympian of any country. I had the pleasure to watch him place second in the 2015 high jump world championship here in Beijing. The crowd in the Bird’s Nest only had eyes for him. No one could compete with the showmanship of Zhang. Don’t buy the hype? Watch these gifs and try not to smile. I dare you. 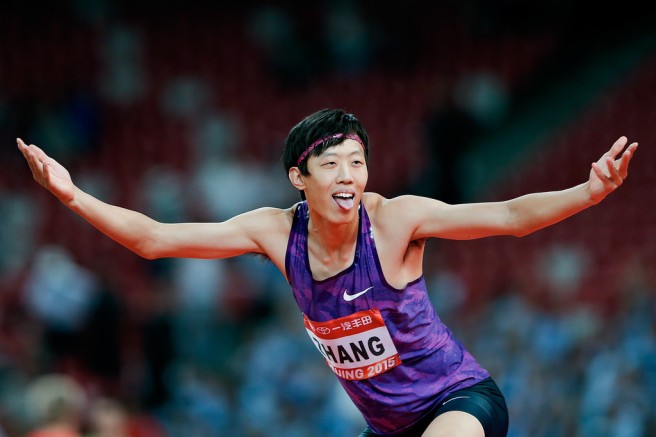 He placed 2nd in the world championship in 2015 and only qualified in the top 25 in Rio. He was a favorite to medal. I hope he has continued success in the future.

This one might be too easy as it instantly attracted international headlines, but it is worth mentioning. No. It is above mentioning; it is worth the number three spot on our list.

He Zi (何姿) was minding her own business, collecting a silver medal for the three meter spring board, when Qin Kai ( 秦凯), a bronze medalist, proposed to her.

The proposal on the medal stand ensured plenty of cameras were around to grab pictures.

As an aside, it is nice to see such a simple and human moment at the Olympics. It is very easy to think of these young adults or kids as symbols of countries, people to pin national hopes on. What a beautiful way to remember the true scope of it all.

I really struggled with the top two stories. However, every story can’t be a top story, so that is why the incredible Fu Yuanhui is gifted our number two spot. Let’s start with a picture. Can you guess which is her?

It is sometimes easy to forget that China is a communist country. Official statements from the government have their own dialect- 客套话。 客套话 is the bureaucratic, robot like language of China, and it is often devoid of any meaning. That is why the smiling and unfettered emotion of one woman, Fu Yuanhui, took China by storm.

It all started with an interview.  The link I provided shows her interview and some basic translations, and it will make your day better. This interview is iconic. Her reaction is now a meme for online marketing everywhere.

Wechat (微信), the popular communication app in China, has a series of emoji’s for her.

Countless companies now use her reaction as a marketing tool. Don’t believe me? 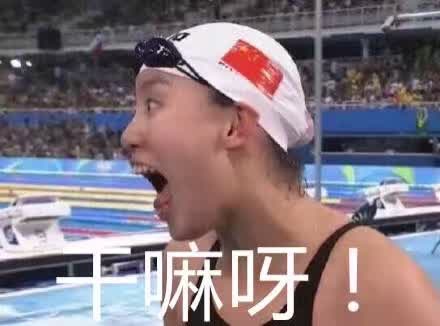 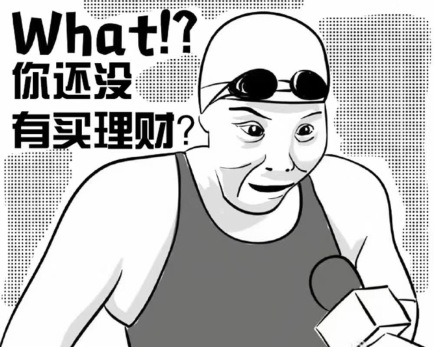 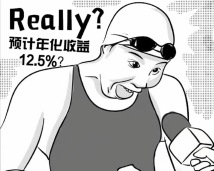 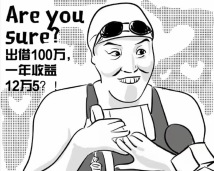 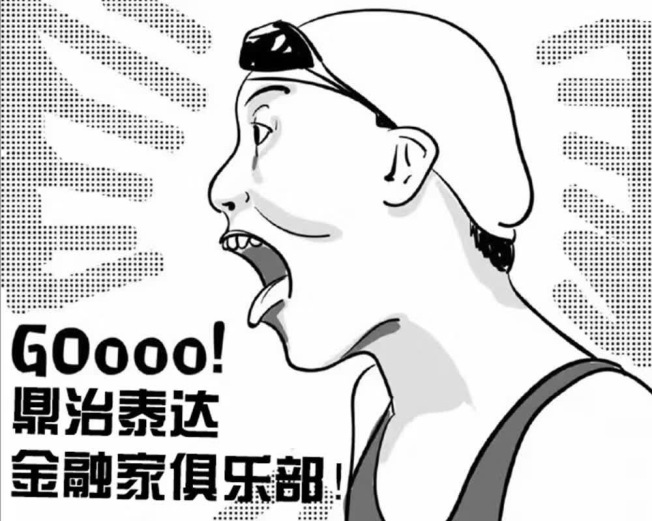 “So, the number two story goes to a woman with an adorable interview? Got it. Seems straight forward.” Oh no, imaginary viewer used to advance my story line, that’s not all.

She admitted she swam while on her period. Many people rightfully applaud her confidence to talk about the taboo topic. Even more Chinese men probably responded with, “hey, what is that anyway?”

Sexual education in China is growing, but is largely- um, what’s a nice way to say this- nonexistent. From banning dating in schools to wide spread misconceptions about health, sexual education, or even basic anatomy knowledge, sexual education is lacking. For Fu Yuanhui to compete while on her period and then openly discuss it is courageous. To do it as a Chinese woman in the public eye is paving roads.

For her iconic interview, wide smile, entertaining medal ceremonies, and not shying about female anatomy to a country that so often does, Fu Yuanhui, the Chinese swimmer who is now a social media darling, earns the number two spot on our list.

First, congratulations for making it this far. Second, here is a brain busting thought exercise: what Olympic sports other than swimming does China typically excel at? I’ll give you a few minutes to get a pen or perhaps call Alex Trebek.

Ok, what did you come up with?  Ping Pong? Badminton? These are sports that western countries are more likely to call ‘sport-like-event-that-is-not-really-a-full-fledged-sport.’  There is indeed a stereotype of Asian countries excelling at repetitive sports, diving and swimming for example. The stereotype extends to sports with small playing balls. Chinese people know this stereotype. They know it well.

“In China, ” Zheng Wang, author of Never Forget National Humiliation writes, “history is religion.” Xi Jinping has outlined, in an unbelievably vague way mind you, the Chinese dream. It is a dream based on ‘rejuvenation.’ China is obsessed with its history, and it largely based on two ideas. First, China is the oldest and greatest civilization in the world. Second, for more than one hundred years, China suffered national humiliation and was figuratively and literally raped by imperialism.

Currently, the communist party’s source of legitimacy is rejuvenating the country to its former and rightful place atop the world, a world which has done everything it can to hurt China. Zheng Wang’s book has an entire chapter devoted to Olympic politics. In 1959, a table tennis player named Rang Guotuan became the country’s first world champion in any sport. Mao Zedong praised the victory as a ‘spiritual nuclear weapon.’

Their history and national identity involves being a professional victim on the way to regain former glory. Silver medals are nothing. We want gold. We want gold in everything. China was the pinnacle of civilization. Of course we should receive gold in every sport.

It is this concept that is key to understand why the Chinese women’s volleyball team deserves the number one spot on our list: nationalism and national identities.

China beat the world at a sport it wasn’t ‘supposed’ to win. China is good at sports with small playing balls.  Volleyball has a large playing ball. So how in the face of dwindling medal counts did China further it’s national identity?   Winning at a new sport. Being the best at a sport that breaks a stereotype. Moving from humiliation to mythical greatness.

For their highly publicized win and for helping rejuvenate China, the Chinese women’s volleyball team and their gold medal deserves the number one spot on our list.