China’s economy has drawn a lot of attention recently. The following article in Bloomberg was forwarded to me when it was published:

This article -and almost all of the economic ‘news’ regarding China- misses 3 crucial points.

The Bloomberg article linked above begins as follows:

Once again, the world’s investors are turning their worried gaze toward China. And for good reason. Economic growth in the third quarter sank to 6.5 percent, the slowest pace since the depths of the global financial crisis in 2009.

Quoting Chinese GDP growth is confused at best and disingenuous at worst. In China GDP is an input, not an output. The Chinese government sets economic growth rates before the year starts. From Reuters regarding 2019 GDP targets (emphasis mine):

The proposed target, to be unveiled at the annual parliamentary session in March, was endorsed by top leaders at the annual closed-door Central Economic Work Conference in mid-December…

In order to achieve this growth, the Party manufacturers high rates of investment so that total economic output at the end of the year equals goals set before the year begins. In other countries, GDP is-roughly- calculated by measuring economic output in a given year. In China, GDP is set before the year begins and economic activity is conducted until output equals the set goal. To say that Chinese GDP sank to 6.5% is wrong. Chinese GDP was ordered to 6.5%. The number itself says very little about actual growth in China.

As a thought experiment, consider what would happen to US GDP if the city of Chicago was recreated on the opposite side of Lake Michigan. Initially, the US would see a large spike in GDP as concrete, steel, and labor outputs increase to build the new city. These assets wouldn’t be value-creating, and they would eventually be recognized as wasteful and non-productive. This is what happens in China. To achieve growth targets set at the start of the year, the Party manufactures SOE growth and  state planned lending to provide artificial growth to GDP.

If GDP is artificially stimulated, how do we measure what is wasteful and nonproductive? How do we differentiate recreated-Chicago versus real economic growth? We can measure state growth relative to private sector growth. Consider the following two charts: 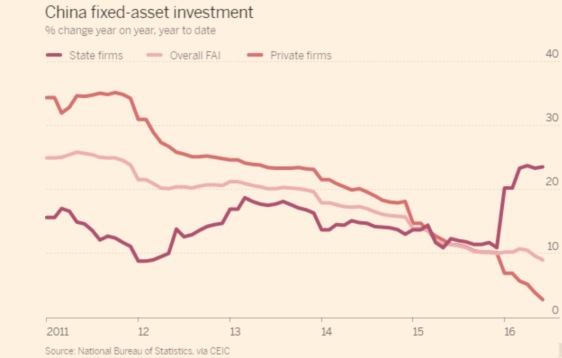 I highlight investment because it is the most important driver of Chinese growth. From Goldman Sachs:

And from the Financial Times:

The debt, equivalent to 260 per cent of gross domestic product, has brought with it dramatic declines in credit efficiency. The International Monetary Fund points out that in 2016 it took four units of credit to raise GDP by one unit. A decade ago the ratio was 1.3 to one.

Amazing that state ROI is so stable when private sector returns are reducing.

3.) The Music Isn’t Planned to Stop

When does this all come to ahead? When is the crisis? Is it imminent?

China is continuing its state-planned, debt fueled model, and eventually that will have to stop. However, it is impossible to say when that stop will occur. I currently keep my eye on two things.

First, where does M1 growth go from here? Can China manufacture more fiscal growth in the face of increasingly inefficient lending? 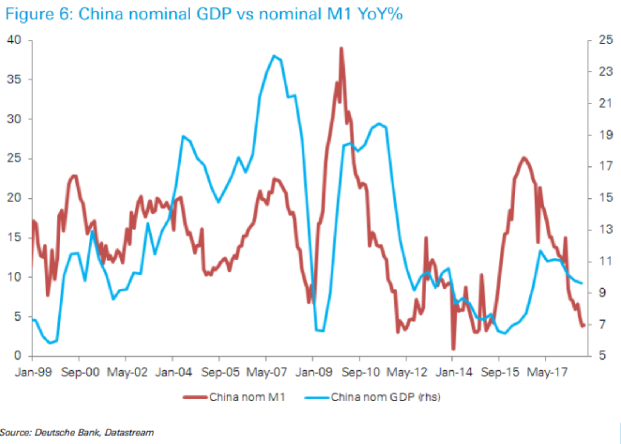 For this question, I highly recommend you read China Dashboard. They write:

China’s private sector is shrinking for the first time in two decades – an extraordinary development contrary to the hopes seeded by the 2013 economic reform objectives and decades of talk about withdrawing the state from the marketplace.

Credit growth, debt, economic reform. This is the story that matters regarding Chinese economic activity.

Savings, Investment, and My Worldview

Riemann Surfaces are pretty neat. Frankly speaking, anything with complex numbers – sometimes referred to as imaginary numbers- is just cool. I think there is just something intrinsically pleasing when they are modeled. 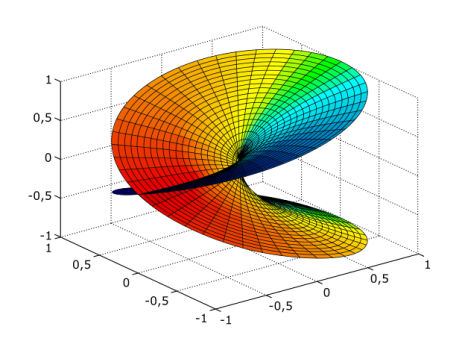 Economics, like Math, has many tools . This blog has tended to use one or two tools when addressing China and Chinese trade policy. The most noteworthy of which is the following:

Don’t panic. The function above states that a trade deficit (imports-M- less exports-X) is equal to the savings deficit (investment-I- less saving-S) plus the government’s fiscal deficit (government spending-G- less its tax revenue-T).

This blog has consistently talked about policies that influence national investment, savings, and consumption rates, because that is a key tool for how I understand China. Consider the picture below: 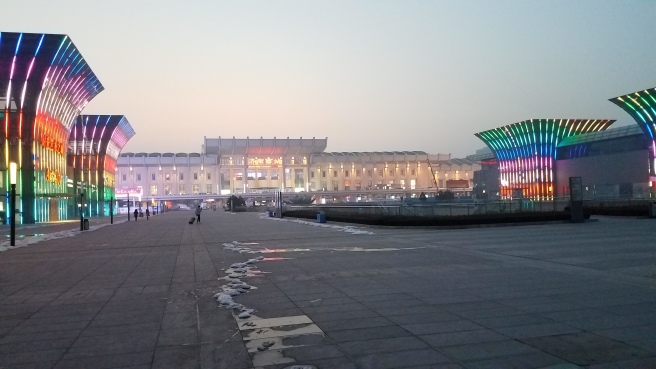 In China you return tickets to your company in order to get reimbursed for travel expenses. I wish I could have kept all of my train tickets. Thanks to DuPont for the first class travel.

One could look at the empty infrastructure in Jinan and see wasted money (NY Times link – Good read), but I believe a better mental exercise is to determine what it says about the relative power of different parts of the economy. China and its state banks deploy large swaths of capital to local infrastructure projects, so China’s investment rates are quite high. Investment rates are so high because of a set of policies that force money from savers and consumers to investors and producers: environmental degradation, artificially low interest rates, tariffs, and state owned enterprises – to include banks. This means that Chinese people receive a smaller portion of GDP so household consumption is low and savings are high. If there are 4 sectors to an economy- normal households, wealthy households, businesses, and governments- we can observe the ratios of investment, savings, and consumption to paint a story about who is benefiting in a given economy.

This ratio of investment and savings also fits into trade. I have previously written about how domestic policies – like tariffs – affect the balance of investment and savings in an economy and can impact foreign trading partners. This reasoning- domestic imbalances leading to foreign trade friction- has been a theme of my blog. It greatly contributes to my worldview.

Tsinghua University and What Caused The Great Recession

I was blessed to study at Tsinghua University (清华大学). At Tsinghua I, unsurprisingly, found myself attending meetings with the Tsinghua Economics Club. It was there that I inevitably talked to my Chinese peers about the real economy and how China’s domestic imbalances affected America. China, I contended, was unfair.

My thoughts were met with poignant questions: is there a link between the real economy, trade imbalances, and East Asian capital account surpluses with America’s financial stress and the Great Recession?

I found the answer from BIS, the Bank for International Settlements. Consider the following pictures that show trade flows and banking flows. 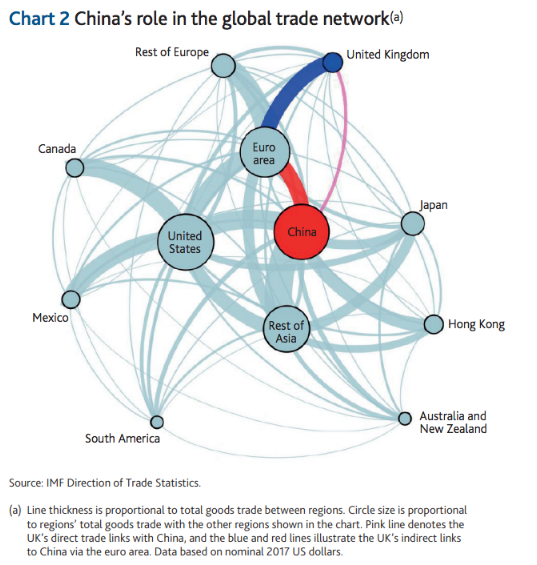 What imploded in 2007-2008 were not Sino-American financial relations, but the interlocking claims between American and European banks. I’ve written about this previously. My favorite math, my worldview based on investment and savings rates, was lacking when confronted by questions at Tsinghua.

Discussions at Tsinghua taught me that gross capital account flows matter. They matter a lot. In 2007-2008 Europe’s banks were at least if not more dangerous than their American counterparts. They straddled three giant credit bubbles: in the US, in the hot spots of the Eurozone, and in Eastern Europe. Their leverage was enormous, their capital laughably thin, and unlike their US counterparts they had considerable currency mismatch on their balance sheets. They needed to raise dollars to hold huge portfolios of America subprime. Their primary home funding sources were in European currencies. 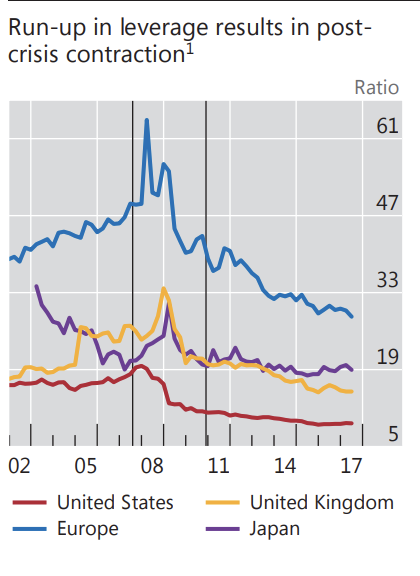 European banks went to great lengths to underwrite mortgage backed securities. Did you know that from 1997 to 2007 it was not an American bank that was the top underwriter for MBSs? 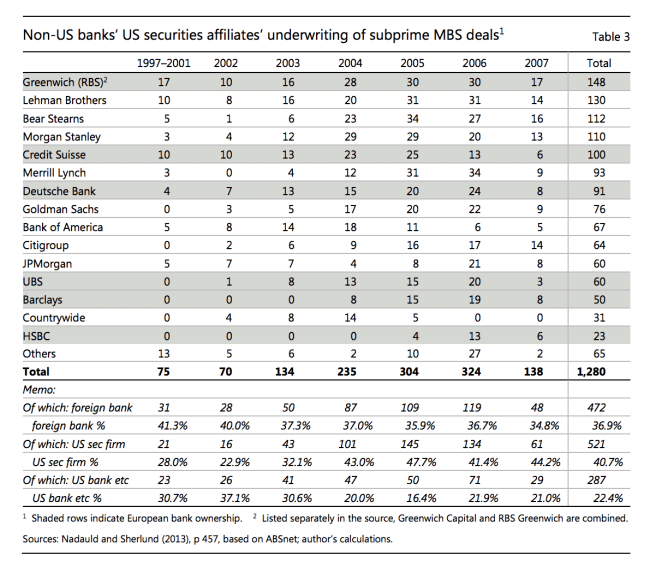 When emerging markets like China acquired US safe assets, they crowded out other investors and created the opportunity for private financial engineers to launch the securitization boom. The industry generated a new, private source of safe assets. European banks bought into short term gross flows (both in and out) while comically leveraged. In fact, the earliest sign of coming collapse was Paribas’s announcement in 2007 that it was closing its US real estate funds, for lack of liquidity in the market. Following as it did on the difficulties of several smaller German banks, one might think of this as a moment of European crisis.

So, again, what caused the Great Recession? It is worth repeating. Emerging markets like China acquired US safe assets, crowding out other investors and creating the opportunity for financial engineers to launch the securitization boom. The industry generated a new, private source of safe assets. European banks poured money into America to shuffle assets into MBSs. A European banking glut was a crucial – if not the crucial- driver.

There exists different rule sets for different economic segments. In 2008 central bank liquidity swap lines were deployed within a familiar trans-Atlantic frame. The swap lines still mapped the contours of the cold war and world war II. On the new frontier of the global economy none of that soft tissue is present- Russia, India, and China still have no swap lines. Rule set mismatches are always friction points. I see less-and-less global savings-glut imbalances, while I increasingly see global rule set imbalances. I am pessimistic about our ability to resolve these discrepancies.

BIS study links (all worth reading):

Global imbalances and the financial crisis: link or no link?

My favorite studies on the Banking Glut:

ABS Inflows to the United States and the Global Financial Crisis