Short thoughts regarding the trade war today. In short, don’t attribute too much to tariffs yet, and most evidence (see below) shows potential economic weakness in China is self-made.

1.) I highly recommend the following reading from the South China Morning Post: Slowing manufacturing and Beijing’s response to said slowing. The articles contend that Chinese manufacturing, particularly small and medium sized enterprises (SMEs), is seeing reduced output due to the trade war.

2.) Yes but, the trade deficit has been high in 2018; a five month high was reached in July. Newest data for September has the US deficit with China at its largest amount ever.

Are the tariffs already showing results by squeezing manufacturing profits? Is July’s trade deficit a thing of the past?

3.) Maybe, but there are a few things worth noting that make me skeptical. As an aside, I constantly refer to credit growth in different sectors, because credit growth drives China. 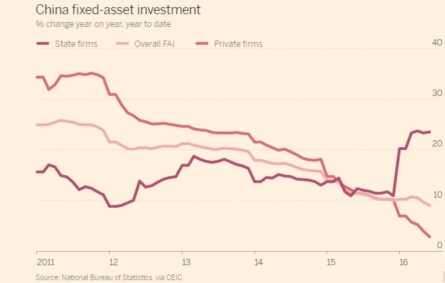 4.) Chinese credit growth is still growing faster than GDP, and how it grows matters. I sincerely encourage you read Christopher Balding‘s most recent post in which he describes how shadow banking, which largely finances SMEs, has reduced while traditional bank loans have grown. Seriously, it is a little long, but Balding’s piece is excellent.

5.) In summary, China’s economy is still state led, and it is impossible to discern if current SME manufacturing woes are a result of the trade war or a continuation of a trend line we have observed for more than a decade.

6.) 1st Quarter Chinese economic activity is always low due to Chinese holidays. Further tariffs might come to fruition in February of 2019. I don’t think we will have a meaningful data set for the tariff effects until this time next year at best.