This article by George Magnus gives an outstanding overview of the Chinese economy and predicts a devaluation in the RMB. Today I would like to tell you why he is wrong in predicting a devaluation. The RMB is, in fact, undervalued.

The over valued consensus

The over valued consensus is quite easy to explain. Chinese growth is dependent on creating large amounts of debt. Those with capital, rich people, are increasingly worried about how that debt will be paid. Due to their concerns, capital is fleeing China. This creates a positive feedback loop for capital outflows. Because so much money is leaving China, there is more supply of RMB than demand.

Why the over valued consensus is wrong

It was not that long ago that the graph below was enough evidence to convince the world that the RMB was undervalued.

This is China’s large current account surplus. It is this graph that convinces me the RMB is undervalued.

The Chinese growth model dictates an undervalued currency. The same growth model dictates more savings than investment. These cannot change. The current capital flight is also a necessary part of the growth model (see my previous post about cycles), however it can be controlled. The current account surplus isn’t going anyway, however the capital account deficit can be controlled or manipulated. Controlling the capital account is a political decision; it is a political decision well within possibility. 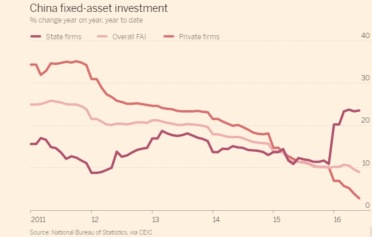 I believe that investment will no longer be able to sustain economic growth. This graph is similar to the Battle of the Bulge. The Chinese government is throwing their weight into propping of investment, but ‘miracle’ growth from high investments and financial repression is over. Only government backed investment is keeping growth rates stable. I believe that this is a greater immediate disaster than China’s capital account deficit.

Step one of my prediction is a rise in China’s current account surplus. Look for it to rise over 3%. Step two involves international backlash. The main party would be the United States. Look for the United States to start mentioning key phrases such as “currency manipulator” during and after the election.

A Chinese devaluation is increasingly popular to read about. The battle between the capital and  current accounts is interesting to watch. Money is steadily leaving China, however outflows are slowing in volume. I’m not alone in predicting a stronger RMB. Consider this graph that I took moments before publishing this blog post (taken from Christopher Balding’s blog).

If swap prices are now predicting a stronger RMB, it is worth considering the points I have brought up. A weak RMB was always fundamental to the Chinese growth model.  Capital outflows will have a hard time reversing what has been in place for so many years.